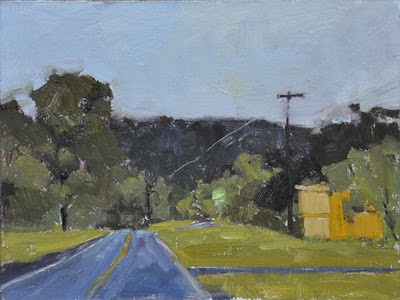 Yellow Farmer's Stand - study, 6 x 8
Each time we go to our place in Hunt, we pass this little yellow farmer's stand. I've never seen it open for business, but there are clearly some well-kept gardens behind the fence.
This was a super-fast sketch of this subject on a gray day--I definitely didn't refine this--just looking for composition and values- not sure I nailed either!
-julie davis
Posted by julie davis at 8:26 PM 3 comments: 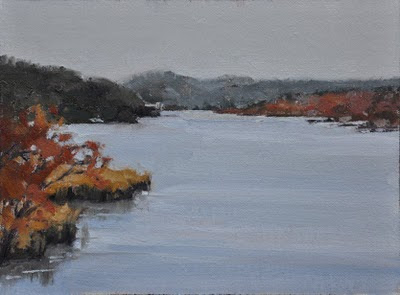 Gray Day, Lake Austin - study, 6 x 8
One of my favorite things about Austin is the Lake. Technically, it's the Colorado River that runs through town and is dammed up several times as it passes through, forming several lakes. The closest to my house are Lake Austin, and Ladybird Lake (formerly Town Lake). This is looking south toward the dam on Lake Austin. I plan to do a larger version of this for my upcoming show.
-julie davis
Posted by julie davis at 5:47 PM 4 comments: 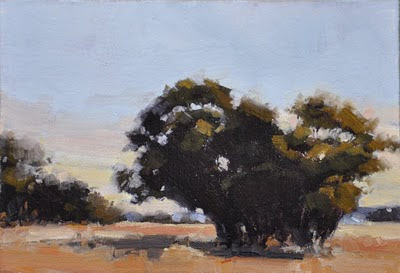 Oaks often have a way of growing in clusters, as if they're huddling up to discuss something. This group stood smartly in a field, overlooking things. 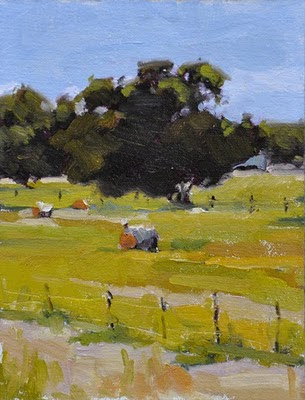 Summer Day, 8 x 6
sold
This was a quick study done earlier this summer--I forgot I had it. It's easy to forget during these dry, cold, winter days just how lush the outdoors become in the spring and summer. Of course, it was something like 74 F today in Austin, so we're headed there soon!
-julie davis
Posted by julie davis at 9:27 PM 5 comments: 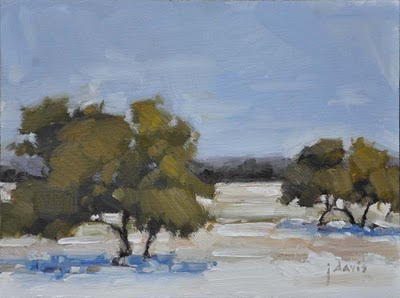 Snow Melt, 6 x 8
Another attempt at a "snow" painting. Kind of a snow painting, anyway. The snow melted so quickly (and was spotty to begin with), that the fields were patches of snow and grass. Temps were down to 17 F here last night, but in typical Austin fashion, the coming week's highs will be in the upper 60s, lower 70s.....ahh, winter.
-julie davis
Posted by julie davis at 9:01 PM 6 comments: 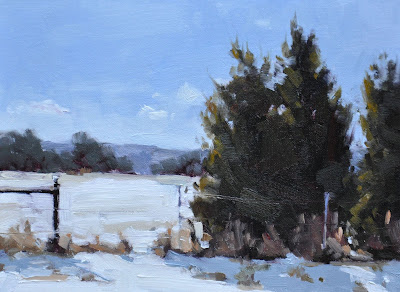 Last Friday, Austin received a whopping inch (yes, one) of snow--and school was cancelled (mostly due to the ice that was so nicely hidden beneath the snow). We get so few "snow days" here that we were all pretty excited.

Around noon when the roads became passable, I headed out to Hunt to meet some college girlfriends as planned (we were not about to let a little snow cancel our plans!) Just outside of Austin, I had to stop and take some photos--and make a mental picture of it all. It really was beautiful, and an entirely new way of seeing the countryside with which I'm growing so familiar. I must say, I had a blast painting this, and knocked out a larger version today. Here's to more snow days! 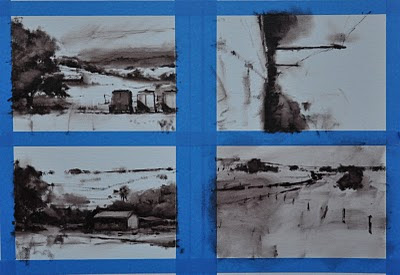 Sketchboard
And the last of my painted "sketches." I've also posted the board on which I did them all for you to see. I like this last one, but it's the least developed of the four, so I'm still tossing it over in my head whether to do a larger one.
-julie davis
Posted by julie davis at 8:58 PM 7 comments: 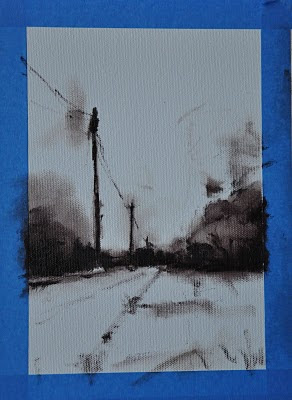 Sketch 3, 8 x 6
A bit out of order, but here nonetheless, the third "sketch" I made last week on the large panel. Unlike the first two, I haven't painted this one larger yet, and am still debating.
For all my Northeast and Canadian friends out there--brrrrrr!!! Our gorgeous weather is gone and it will be 16 degrees F tonight with a wind chill of 3 or something Wednesday morning. For here, that's really cold. Actually having to wear a real coat!
-julie davis
Posted by julie davis at 7:33 PM 2 comments:

Enter your email address to subscribe to my blog: