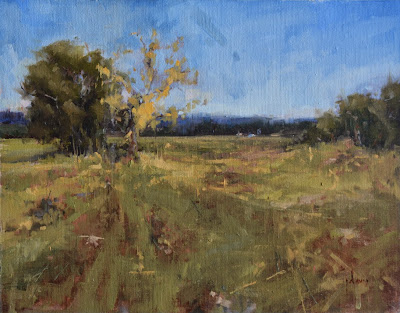 These trees were intertwined, and the yellow one, though in decline, still invested the energy to produce a few beautiful golden leaves.  I found it compelling, though my husband thought I should name the painting "Old Yeller," or "Yella Wood."  See what kind of help I get around here? 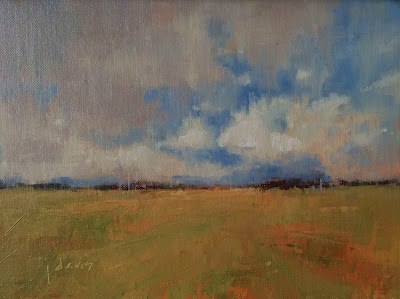 I struggled with this little piece a bit.  It's a seemingly simple scene, but my sometimes things flow and sometimes they stumble along.  Interruptions like phone calls, lack of singular focus at the start, having to leave for carpool and return to finish….hmmm…I wonder why…. Despite these conditions (under which I know better than to try to paint),  I like the result of my efforts. I do hope the next comes off more smoothly, however, because I really love scenes like this.

-julie davis
Posted by julie davis at 10:31 PM No comments: 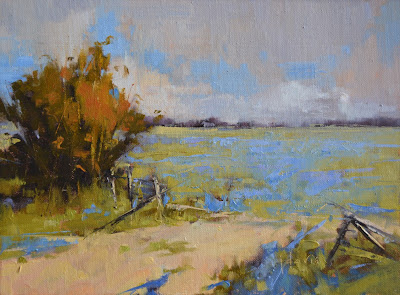 Springtime in Texas, study
6 x 8 in., oil on panel

What a blast it is when the bluebonnets emerge in the Hill Country at the beginning of Spring.  This year they've been a little slower to show up because of our cold winter, but they're here.  They even make a little bush of a tree seem important. :) 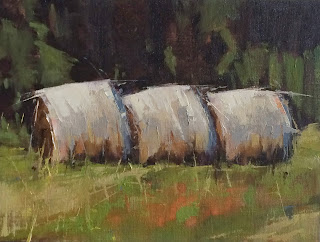 Spring Break is behind us here in Austin and hopefully so is my break from bi-weekly posting.  Life finds its ways of interrupting painting, and I have to allow that right now…I'll never get these days back with my girls.

However, exciting things are still going on!  I've been waiting to share this and now it's a reality:

A piece I did in 2012, "Old Smokehouse," is part of the collection of New York-based curator, artist, and collector, Ken Ratner.  Over the next two years, several museums will host his collection in an exhibit entitled "A Feeling of Humanity: Western Art from the Ken Ratner Collection," of which Old Smokehouse is a part.  The Mattatuck Museum in Connecticut is showing the collection from March 16 - April 27.  The Rockwell Museum of Art in Corning, New York (Oct. 3 Jan. 11), the Bone Creek Museum in David City, Nebraska (summer 2015), and possibly one more venue will follow.

If you're in one of these areas and have the opportunity to see the collection, please go see it!  There are many talented artists included, and I am exceptionally honored by and grateful for Mr. Ratner's selection of one of my pieces to be both a part of his collection and his exhibit.  Here are a few words from Ken Ratner, followed by a link to a write-up about the Mattatuck event:

"For the past 25 years, I have focused much of my collecting on the Ashcan School artists.  The humanity of the artists as reflected in their work is the primary reason that I have collected their pictures.

During the past 2 years, I have shifted toward contemporary western art, and have collected works by artists who are also drawn to humanity.  Some of these artists include, Gary Ernest Smith, Clyde Aspevig, and Logan Maxwell Hagege….   The exhibit...will also include fine examples by artists of the past, such as Robert Henri, John Sloan and Kenneth Miller Adams.

One of the most important things I was trying to accomplish in forming my western art collection was to select artists who I felt were exceptional who have not yet achieved the recognition they deserve.  In essence, I was trying to give a voice to a fine group of painters, such as David Forks, Erin Hanson, George Coll, Caroline Norton, Don Gray, Julie Davis and Johnson Yazzie.  Early on, I decided that I wanted to purchase small works, partly due to budget constraints, but more than that, it was so that many unsung artists would have the chance to showcase their extraordinary talents." 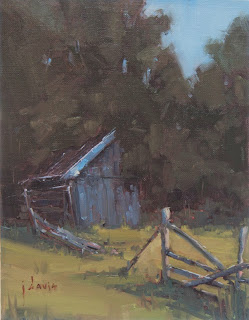 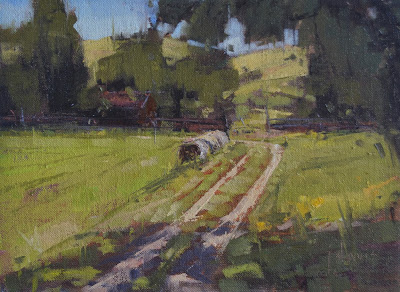 This piece of land is just outside of Kerrville, Texas.  The composition didn't require much creativity on my part--it was ready and waiting for me.  The shaded dirt road led right to the lit bales of hay and around to an old hidden structure behind a fence. I just tried to do it a little justice...

Enter your email address to subscribe to my blog: